We've documented 29 accessibility features for Knockout City in the Difficulty, Getting Started, Reading, Navigation, Controls, Visual, Audio and Communication areas to aid enjoyment of the game for different players. This report is created with input from accessibility experts and the player community to help people find games that have the accessibility features they require. Once you have found potential games on the database, there are excellent specialist accessibility sites that offer in-depth reviews to guide your purchasing decisions.

Knockout City is a futuristic sports game were rival crews take on dodgeball style battles. It combines arena battles with projectile combat. With the focus on the ball as much as the other players, this brings more strategy and a great emphasis on sports gameplay than games like Overwatch or Fortnite.

Although you cannot select the game's difficulty, you are automatically matched to games with other players of a similar skill level to you. There is an optional tutorial divided into several sections that enables you to hone your skill and learn the basics, as well as a training mode that enables you to practice without the stress of a real match. 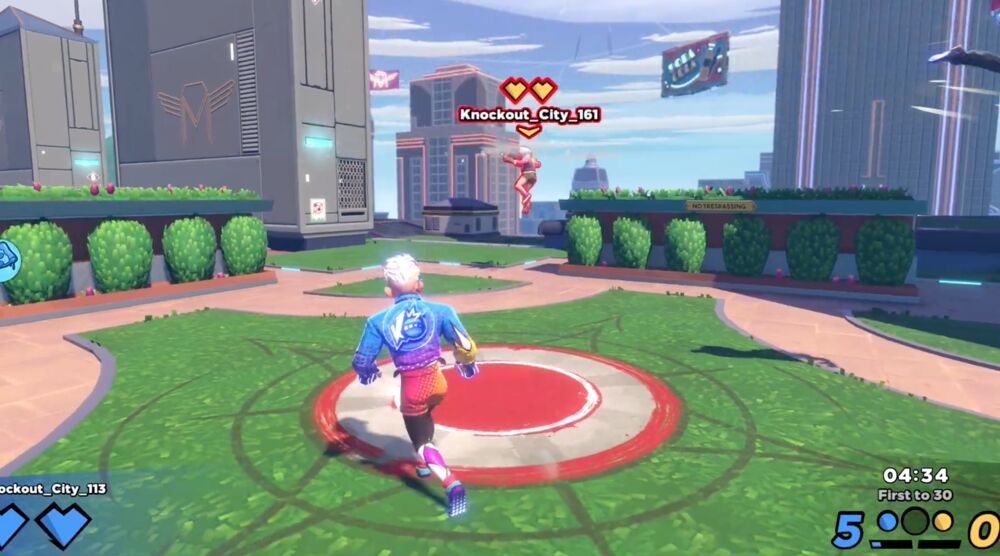 Players: You can play this with 8 players online

We've documented 1 accessibility feature for Difficulty in Knockout City which deals with how you can adjust the challenge of play, and assistance the game offers when you fail or get stuck.

We've documented 3 accessibility features for Getting Started in Knockout City which deal with what support is offered to get started with the game. This includes customising the experience when you first open the game via any onboarding processes it provides as well as tutorials and other assistance when you first start playing.

Practice Area: You can practice freely without opponents or time pressures. This can be a specific practice option, or the ability to play levels with the easiest opponents to improve understanding and skill.

We've documented 5 accessibility features for Reading in Knockout City which deal with how much reading or listening comprehension is required, how well the game provides visual and audible access to the text and whether subtitles and captions are a good fit for purpose.

Large Clear Subtitles: Subtitles are large and clear, at least 1/20 (46 pixels on 1080 screen) the height of the screen, or can be adjusted to be. Considered separately from the general text of the game, the subtitles are large, clear and of good contrast.

We've documented 2 accessibility features for Navigation in Knockout City which deal with how the game provides guidance and assistance to navigate its worlds. These are only for games that have traversal and exploration in 2D and 3D spaces.

Visual Directional Cues: Additional in-game visual cues that signpost where to go next and how close you are to arriving. This can be with camera movement to focus on your destination or important items. It can use light, breadcrumb trails, in-world pointers to identify your mission's target location.

Menus Don't Wrap: Menus don't wrap and stop the cursor at the bottom of the list if you press down. Or menus do wrap but make it clear that you are back at the top of the list with sound or narration.

We've documented 9 accessibility features for Controls in Knockout City which deal with how you control the game, different options for alternative inputs and whether you can remap these settings to suit your needs.

Swap Sticks: Can swap the sticks over so that you can use the opposite sticks to control the game.

Invert X/Y Axis: Can invert the direction required to control looking and aiming. This enables you to match your instinctive orientation when looking.

Vibration Optional: Controller vibration not used in the game or you can disable it.

We've documented 3 accessibility features for Visual in Knockout City which deal with how you can adjust the visuals to suit your needs, and offer additional information if you can't hear the game.

Outline Interactive Elements: Characters, platforms and enemies can be outlined or highlighted for visibility. This can be with a large border around the character or a special visual mode that adjust the colour to make characters more visible.

We've documented 2 accessibility features for Audio in Knockout City which deal with how you can adjust the audio of the game and whether audio cues compensate for aspects of the game that are hard to see.

Customise Audio Levels: Control volume levels of specific events and elements in the game. This enables you to tailor the most important sound levels to ensure you can hear them.

We've documented 4 accessibility features for Communication in Knockout City which deal with how you can communicate with other players in the game and what options are available to customise and control this interaction.

Text Chat: Chat to other players by typing text.

Text to Voice: Sent text messages as voice to other players.

Voice to Text: Convert voice from other players to text messages.

PlayStation 4
PlayStation 4 has a range of accessibility settings. Some are system only, some work in games (invert colours and button mapping).