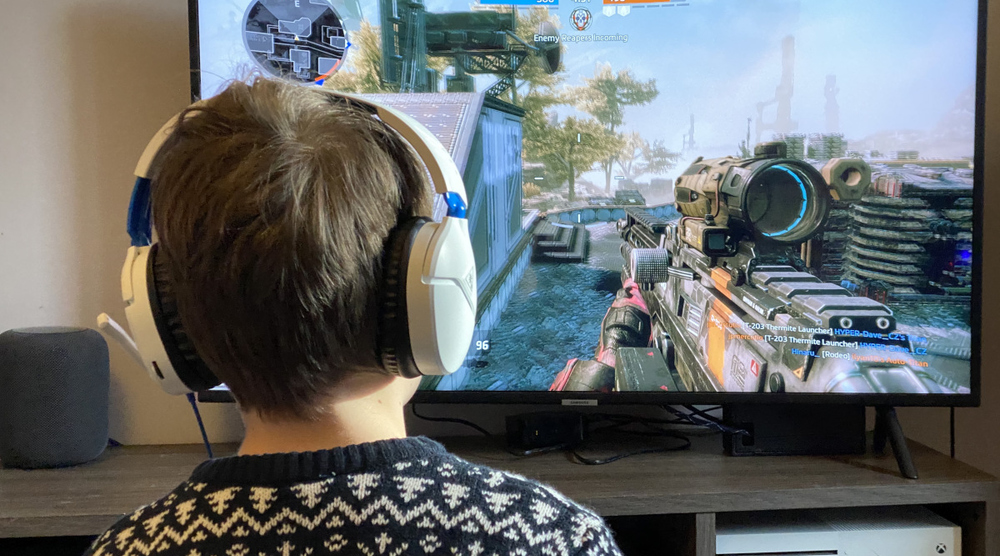 Video games often involve violent virtual content. The exuberance and excitement of shooting or fighting have been fertile territory for big-budget games, not dissimilar in approach to blockbuster films. Add to this the competitive and interactive satisfaction of hitting a target with a gun and you can see why some video games have been drawn to taking this approach.

While graphic novels have become synonymous with superheroes, video games face the danger of being seen as only about shooting. ‘I don’t read graphic novels,’ I’ll say, ‘because I’m not into superheroes.’ Which is kind of ridiculous when they could be about anything, and when they offer an artistic and mature way to tell stories. In the same way, those ‘not into shooting’ can regard video games in general as ‘not for them’.

As you can see from the games in the Gaming Recipes later in the book, in truth video games are a broad medium being created by all kinds of people in all manner of settings with an unending array of topics, themes and narratives. Many of these games are non-violent, not because they want to make a point but because violence is unnecessary in the interactions they create.

However, the Gaming Recipes also include games that intentionally use violence to communicate a particular theme. Limbo’s protagonist comes to all sorts of violent ends, for example, but this is to create the dark, fairy-tale aesthetic which makes the game intriguing and moving for adult players. As the ratings suggest, this violence still needs to be taken seriously for younger players, but parents will be best placed to judge what’s appropriate.

There is considerable back and forth in the scientific community over the impact of video game violence on children, both in terms of effects on behaviour and how they view the world. When Susan Greenfield’s Mind Change was published, in 2015, it sounded an alarm about the effect of technology and games on children, quoting from over 500 papers to pull out overarching trends that point to how our minds are physically adapting to technology. Writing specifically about video games, Greenfield suggested that we are repeatedly rehearsing and becoming susceptible to ‘low-grade aggression, short attention span and a reckless obsession with the here and now’.

However, when this view is tested in focused research, a more complex picture emerges. Take, for example, the preregistered (or peer-reviewed) study of video game violence and its effects by Andrew K. Przybylski and Netta Weinstein of the Oxford Internet Institute (OII).

‘The idea that violent video games drive real-world aggression is a popular one, but it hasn’t tested very well over time,’ says Przybylski, who is Director of Research at the OII. ‘Despite the interest in the topic by parents and policy-makers, the research has not demonstrated that there is cause for concern.’

‘Our findings suggest that researcher biases might have influenced previous studies on this topic, and have distorted our understanding of the effects of video games,’ says Weinstein. An important step taken in this study, but often absent in previous work, is preregistration, where researchers publicly register their hypothesis, methods and analysis technique prior to beginning the research to ensure it is balanced and unbiased.

What studies often prove is correlation rather than causation. An example Przybylski often uses is the correlated rise of ice cream sales and violence in cities. To claim causation from this correlation would obviously seem ridiculous, but this is what many studies on violent video games have strayed close to suggesting. In such cases, other factors causing the correlation are often missed – in Przybylski’s example, rising temperatures lead to more ice cream sales but also to more young men being out on the streets in the evenings.

The panic over violent video games is sometimes escalated on the basis that today’s sophisticated technology is more immersive and realistic. However, as Howard Schechter writes, ‘popular works that seem utterly innocent to us – the product of more innocent times –were, in their own day, condemned for precisely the same reasons that today’s mass media scapegoats are: for creating illusions of violence so intense and convincing that impressionable young minds were bound to be corrupted by them’.

Steven Johnson highlights how the effects of incumbent media on the brain are undetectable. But, he says, ‘the effects of the new media become apparent because you have something to measure them against’. Rather than young minds being moulded towards violent tendencies, the pattern he sees is that of ‘the mind adapting to adaptation’, as a younger generation is ‘more comfortable with the process of probing a new form of media, learning its idiosyncrasies and its distortions, its symbolic architecture and its rules of engagement’.

This isn’t to suggest that there is no issue with violent content in video games. Rather, we need to pay close attention to the realities of the situation – how these things have played out historically, how new media often seem unhelpfully disruptive, and how children may be using this new technology to imaginatively deal with issues they face – so we can provide healthy and consistent guidance.

This loosening of assumptions around video game violence and progress towards better understanding creates a context in which parents and carers can take positive action rather than start to panic. Most will want to clearly distinguish which violent games are designed only for adults to play and ensure appropriate boundaries are set up. Some will choose to avoid violent games entirely until children are older. Others may play together with their children to enable them to better process any violence. Either way, having open and healthy conversations about violence in games ensures we can help children process it.

Hearing my son gleefully talking about headshots and kills in Fortnite caused me to suggest that he watch the film Saving Private Ryan with me to get a fuller understanding of the reality of those kinds of battles. He was 12 at the time and the film has a 15 rating. While not everyone agreed with my approach, it enabled us to talk about violence in general and specifically in games and films.
This kind of processing, along with playing a wider range of video games, enables children to think through this violence. Far from perpetuating violence, in this way video games can help children build an ethical understanding, sensitivity and appropriate responses to the reality of violence in the world.

If you are worried about violence in the games your children are playing, look up the Pan European Game Information (PEGI) ratings in Europe or the Entertainment Software Rating Board (ESRB) ratings in America. These disclose the level of violence with age limits on game boxes and in online stores.
For physical or boxed games, more detailed information can be looked up on the PEGI and ESRB apps or the associated websites. Along with the age ratings themselves, these provide the examiners’ reports, which go into great detail about the level of violence.

You can limit access to games of particular age ratings via family settings and parental control settings on all modern consoles. This feature has been available since 2006 on the Wii, Xbox 360 and PlayStation 3, and has evolved and expanded over the years.

Setting up these limits today is easier than ever, and well supported with detailed instructions on each console-maker’s website. It’s as simple as creating a child or teen account that is linked to the parent’s account and then picking the appropriate age limit for your child. Once set, children have to request permission to access older-rated games, which parents can choose to accept or deny.

Of course, these ratings are a helpful tool rather than a replacement of the important role parents and carers play in guiding media consumption. PEGI 7 rated games, for example, have content appropriate for any child aged seven years or older, but parents and carers should still guide online interactions, in-app purchases and how long children play.

On the Xbox you also get a weekly email report that outlines which games your child is playing and how long they’ve played them for. On Nintendo Switch the Parental Controls app provides a similar report. This not only provides useful information on the age-rating of games they are playing, but is also a good way to understand your child’s play pattern to add to your Gaming Inventory.