/ Features / When Video Games Get Out Of Control 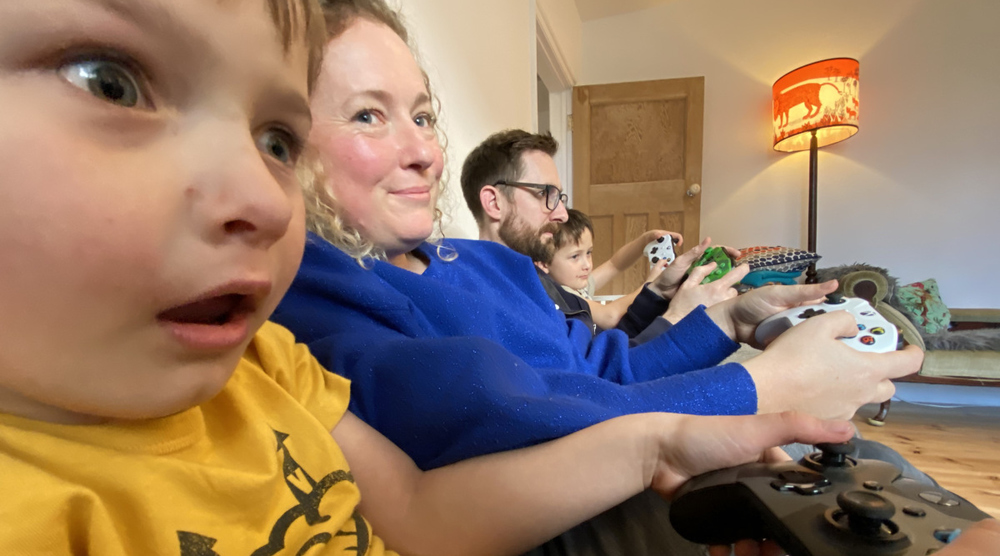 When Video Games Get Out Of Control

Everything we’ve discussed so far is all well and good, but doesn’t there come a time when enough is enough – or, rather, too much is too much? Engaging with video games, having healthy conversations about them and guiding your child’s play sounds good on paper. But what about children at the extreme end of the spectrum, where common sense and balance has become impossible in the face of obsession?

However small the percentage of children with a clinically diagnosable problem with video games at the level WHO describes, surely there are still limits to the touchy-feely approach for parents of gaming-obsessed offspring? With new games holding children’s attention for longer and longer, doesn’t there come a time for detox camps, quitting all video games, hiding power cables or unplugging the Wi-Fi?

Johann Hari, an author and journalist specialising in addiction and depression, challenges the abstinence assumption common in drug addiction treatment: that the most pressing concern should be to remove the object of obsession from the life of an addict.

In his book Chasing the Scream, he suggests that drug addiction is due not only to how chemical substances operate on the brain but to the environment of the addict. He tells a story of an experiment on rats. When in an empty cage with two bottles of water, one mixed with heroin and one without, they quickly preferred the drugged water and killed themselves. By changing the environment so it was full of everything rats love – good food, company, reproduction and entertainment – none of them overdosed.

It’s a shocking statement, ‘the opposite of addiction is connection’. It goes against assumed common knowledge. Rather than focusing on removing the thing that is apparently driving detrimental behaviour, we should focus on creating an environment where the person can re-establish connections with other people, work, society, the future and themselves.

Of course, rat behaviour doesn’t necessarily equate with human behaviour, and video games aren’t chemically addictive. Also, as Hari acknowledges, we need to be careful not to encourage enabling relationships that may lead to addiction relapse. But still, he makes a powerful point about the danger of hammering an addict with pressure to stop, before or without addressing their need for connection.

Gabor Maté, a physician with 20 years of experience in family practice and palliative care for addiction, underlines the futility of forceful parenting in his book In the Realm of Hungry Ghosts: Close Encounters with Addiction . ‘While it is natural for the loved ones of an addict to wish to reform him, it cannot be done… The person attached to his addiction will respond to an attempt to separate him from his habit as a lover would someone who disparages his beloved: with hostility.’

In the book Video Game Influences on Aggression, Cognition, and Attention, Rune K. L. Nielsen and Daniel Kardefelt-Winther highlight other reasons not to rush to ban or limit technology. ‘In a day and age where video games form an important part of children’s lives, the message that video gaming is addictive can have unintended consequences. Indeed, scholars warn that immersion and engagement with video games is frequently misinterpreted as addiction which might be used as an excuse to restrict access and undermine children’s rights.’ Overstating the risks can lead parents to rush to apply restrictions that ‘might be ineffective or even harmful for children, limiting their opportunities to benefit from digital technology’.

Similarly, UNICEF highlights the point in its 2017 Children in a Digital World report. 'Applying clinical concepts to children’s everyday behaviour does not help support them in developing healthy screen time habits … And conflating the screen time debate with addiction can even be harmful. For example, in some countries, the idea of addiction to technology has been used to justify the incarceration of children in treatment camps despite a lack of evidence for the efficacy of such approaches.'

How we love children who appear to be addicted to video games requires particular care. Not only in terms of how we apply clinical concepts to their behaviour but how we interpret the cause and effect of their excessive gaming. On both of these levels, simply pressuring children to stop gaming may do more harm than good.

Hari expands his theory beyond addictive substances, in his book Lost Connections. . Too quickly treating any addictive behaviour means we can miss the underlying issues. He reframes clinical depression and anxiety as symptoms of our environment, not just our biology. They are the smoke that we need to understand and pay attention to, rather than just get rid of, so we can see and address the fire.

Unlike chemical substances or physical gratification, gaming is not an easy way to deal with disconnection. Playing video games, as Ian Bogost professor of interactive computing at the Georgia Institute of Technology describes it, requires considerable effort. They are “rusty machinery we operate despite themselves”, he writes in his book How to Talk About Video Games. Contrary to appearances, video games are hard work and require great effort to play.

A child who is using games to deal with other issues in their life has put in considerable energy to get what they need from them. They have taken a risk on a new and imaginative way to cope. They have taken their place in what Johnson describes as ‘a generation that welcomes the challenge of new technologies, that embraces new genres’.

It’s something underlined in the recent study by Pekka Mertala and Mikko Meriläinen that found that ‘children are not mere passive consumers of digital games but are agentic meaning-makers who are capable of critically evaluating digital games when a safe and supportive space and the appropriate medium are provided’.

Particularly at the extreme end of this group, seeing excessive gaming as possibly being brave action by children in response to life’s harsh challenges makes it clear that we shouldn’t remove this remarkably innovative coping strategy without first ensuring they have a connected way forward.
Maté states that ‘the precursor to addiction is dislocation… the loss of psychological, social and economic integration into family and culture; a sense of exclusion, isolation and powerlessness.’ If playing video games too much is a response to this scenario we have a responsibility to understand how the games are helping or hindering our children so we can then guide them to maximise the former and minimise the latter. We can start to undo what Maté describes as the child’s perception of not being ‘seen, understood, empathized with and “gotten” on the emotional level.’

Unlike chemical addictions, we can share the video games at the centre of children’s obsessive behaviour. We can see first-hand what it is about a particular game that they enjoy, and perhaps even need, as a solution to other things happening in their world.

What’s more, unlike addictive substances, video games can offer some of the types of reconnection Hari suggests in his Lost Connections book. As we saw in The Benefits of Video Games chapter, they can be a place for positive social and psychological benefits. They can create deep connections with other people. They offer space to pursue ambitious, long-term creative projects at a comfortable pace. They enable us to imagine the possibility of different values and think deeply and critically about how that might work. They take players who would never consider meditation into a state of meditative flow where they escape anxiety and reconnect with themselves.

This enables us to ask different questions of children at the excessive end of the gaming spectrum. Taking a lead from Maté, we can move from asking ‘Why the addiction?’ to ‘Why the pain?’
Rather than, ‘Why can’t you just stop?’ ‘What’s so important about your game?’ ‘Can’t you see you’re obsessed?’, we can ask, ‘What happened to you before you started playing so much?’ ‘What are you getting from the game that you can’t get elsewhere?’ ‘Why is the effort and work you spend on your games worth it?’

This is what it means to love children who play video games to the extremes described by the WHO’s definition of gaming disorder: paying attention to them, not as broken or tricked by technology, but as individuals responding to their environment in a way that enables them to survive. Rather than putting more pressure on them to curb their behaviour or detox from their obsessive relationship with the screen, we can support them to understand and refine the place video games holds in their lives.

Doing this consistently, with understanding and compassion, but also with strength, patience and resilience to inevitable and sometimes extreme push-back enables us to establish breathing space when things have got out of hand. This reveals if their inability to stop playing comes from loving the game too much or from something deeper. Now, though, we can do this as loving allies, rather than opponents, of our children and of the games they are using to ease their pain.

This avoids the risk of what Phippen and Brennan term ‘over-blocking’ children’s access to video games, which blunts their ability to learn both the benefits and pitfalls of technology. Remembering what Phippen and Brenna found that children ask of us – ‘listen, don’t judge, and understand’ – we can avoid being dismissive and treat them with the respect and authenticity that lead to safe, ongoing support. Rather than win our disagreements over whether gaming is good or bad, we can provide guidance that goes beyond simply ‘kicking the can down the road’, as Phippen and Brennan warn.

Where this exceeds our ability to cope, it’s important to get advice from a doctor and other medical professionals. This should be from those trained in holistic and empirically valid treatments rather than commercial game addiction clinics or detox camps, which often have no evidence-base behind them. Rather than Googling ‘gaming addiction’, start by visiting your doctor, who can direct you to an appropriate service to identify what can be a range of complex problems NHS England describe as including ‘compulsive behaviours, development disorders and difficulties earlier in childhood that underlie addiction’. For more urgent help contact your GP or call The Samaritans (116 123 in the UK).

My hope is that with your growing gaming literacy and the game suggestions in this book, even when the behaviour and worries are extreme you can join your child in their innovative way of finding connection from the games they play; not to blindly endorse their gaming pastime, or to allow antisocial or disruptive behaviour, but to help them understand their gaming more fully and how it impacts on their life, both positively and negatively.

You can help them distinguish between the times they’re playing because they need to and when they are playing because they can’t stop. You can guide them towards a wider diet of gaming experiences that can better serve their mental well-being. You can appropriately use automatic restrictions to create space for the growth of this understanding. You can help them articulate what they get from the games they play. And, most importantly, you can discover what else is going on in their lives that excessive gaming is soothing.