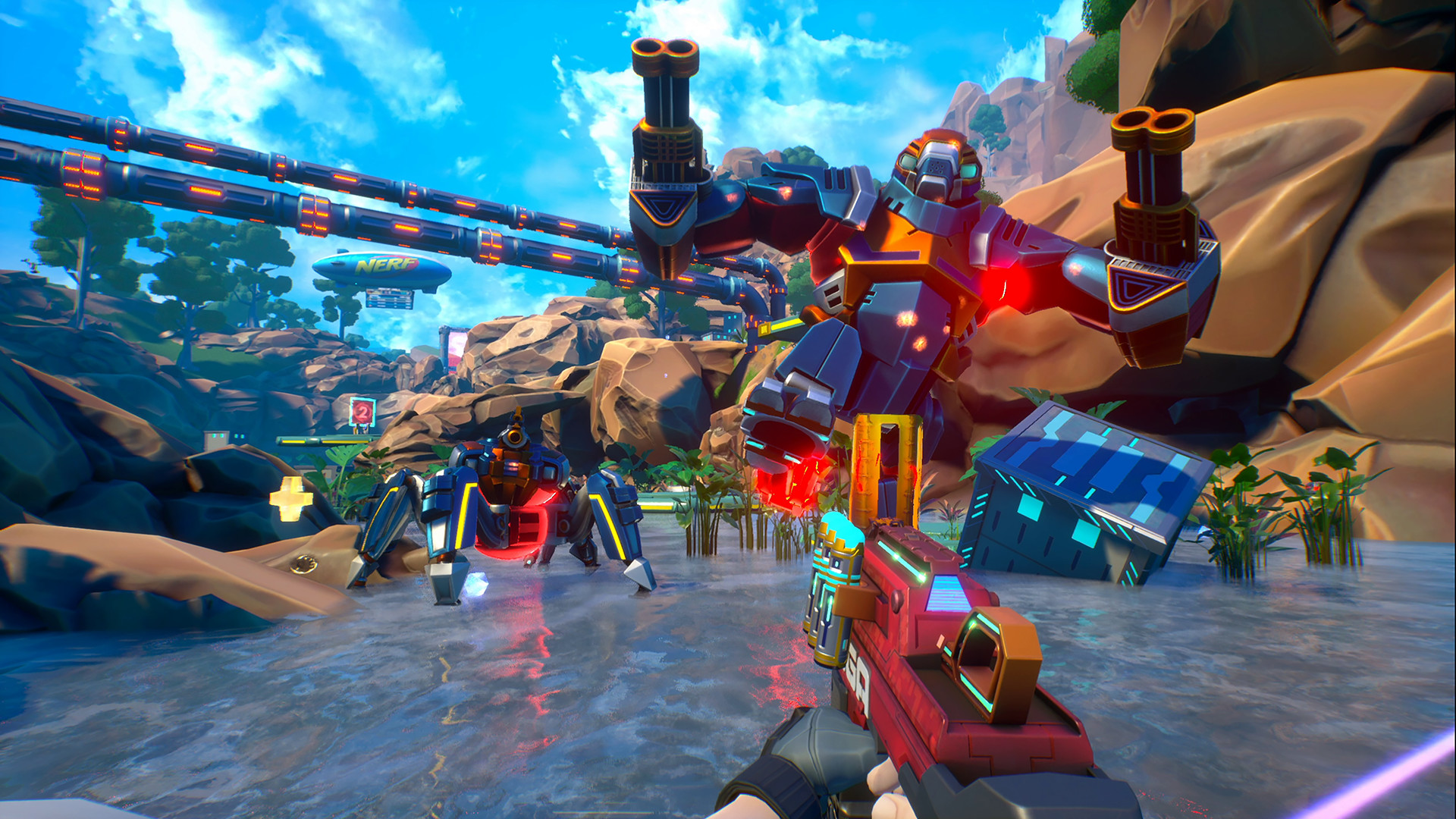 Nerf Legends is a shooting game where you use Nerf guns to defeat enemies and bosses. It offers a gameplay experience similar to games such as Call of Duty, but without the realism of those games, making it more suitable for younger teens.

The main story is about defeating the five Nerf Masters and becoming the ultimate champion. You explore 6 different areas, completing puzzles and defeating all the enemies, then face off against one of the Masters in each area.

Gameplay consists of shooting mostly bug-like robotic creatures and unlocking doors by finding buttons and keys. You need to reload your gun when you run out of ammo, and you can restore your health by defeating enemies. The game leans into the Nerf theme by providing your with an array of real-world Nerf guns to use in the game. Each gun has different stats so you need to find the right one to defeat particular enemies depending on range, damage, fire rate and the like. Then there are darts to collect with abilities like magnetic push, magnetic pull, seeker darts, and freeze.

While you explore each world, you need to run and jump across gamps and find the best hiding spots to ambush your enemies, injecting a level of strategy into the gameplay. You can double jump to reach seemingly out-of-reach areas, and crouch to make yourself less of a target.

Difficulty and death is handled with younger players in mind. Dying in the game has a points-related penalty that will reduce your medal at the end of the round, but this doesn't stop or hamper your progression. This means that youngsters who die often are more likely to get back up and try again.

It's a game that (although criticised by many adult reviewers) offers a great experience for young Nerf fans. Not only do they get to use some of the best real-world Nerf guns, but in a first-person shooter that avoids the extreme realism of older rated games.

View our choice of games like Nerf Legends. This game is good if you want to:

Play Time: This game will take between 5 hours and 7 hours to complete. The main story will take about 6 hours to beat, but in addition, there is a multiplayer mode that can provide several more hours of gameplay.

You can play this by yourself or as a 8-player online game. You can compete in 4-versus-4 team online fights, and also all-against-all last-man-standing bouts. However the multiplayer aspect doesn't have many players to compete against.

Rated PEGI 7 for Violence. This game features mild violence, directed at human-like and mechanical fantasy characters. Violence is unrealistic in nature, as are reactions to it. All weapons used are NERF guns, which do not inflict visible harm. When characters are defeated, they disappear in a puff of particle effects.

7-10 year-olds usually have the required skill to enjoy this game. Younger children may need some help with the controls and to play on easier difficulty.

You need to purchase a Xbox Live Gold subscription to play online with Xbox One or Xbox Series X|S. You can buy the Alpha Pack, which comes with two extra blasters and an outfit.

Our Nerf Legends Accessibility Report documents 24 accessibility features:
While some of the text in the game is large and clear, some areas are not. You can enable subtitles in the options menu, but they are not on by default.

You can turn on Aim Assistance in the options menu, and also adjust the sensitivity of your controls, which are quite slow and heavy feeling at default settings.

While most of the levels are fairly linear, there isn't a map you can view to help you find your way. the game is generally bright, and enemies glow with a bright white, but there are also often bright flashes and shakes.

Some inputs need to be quite precise, and white the aim assistance can help with this, there are still some tricky sections, such as trying to hit targets while being bounced around on jump pads, and other areas that need you to rapidly press buttons. You can change the sprint from a hold to a toggle to remove the need to hold down buttons.