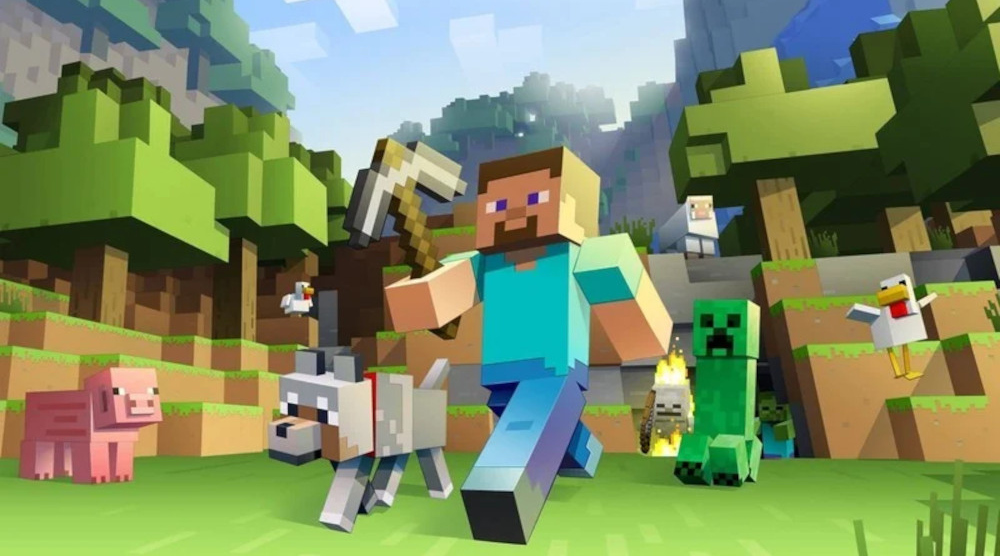 Everything you need to know about getting Minecraft working online for you and your wider family. Which systems support split screen. Getting online with split-screen for more players. Playing with people on different platforms. What subscriptions you need: Realms Plus, Xbox Live Gold, PlayStation Plus, Nintendo Online and Microsoft accounts.

Minecraft can be played on a wide range of systems, from the Nintendo 3DS to the Xbox 360 to the PlayStation 5. However, if you want to play together it can get a little complicated. There’s a combination of playing together on the same system, playing online and playing with people on different systems.

These options are an amazing way for families to get together virtually, play, catch up and hang out. In my family we set up a Realm so the cousins could dip in and out of a persistent Minecraft world on a range of devices, iPads, Xboxes, Switches and PlayStations. Setting it up has taken a lot of research and time as there wasn’t a single guide to do this.

This is our guide on the simplest way to get your family playing on Minecraft together, whether you are in the same place or online. There are a range of options depending on the technology you have available that we will go through in turn: 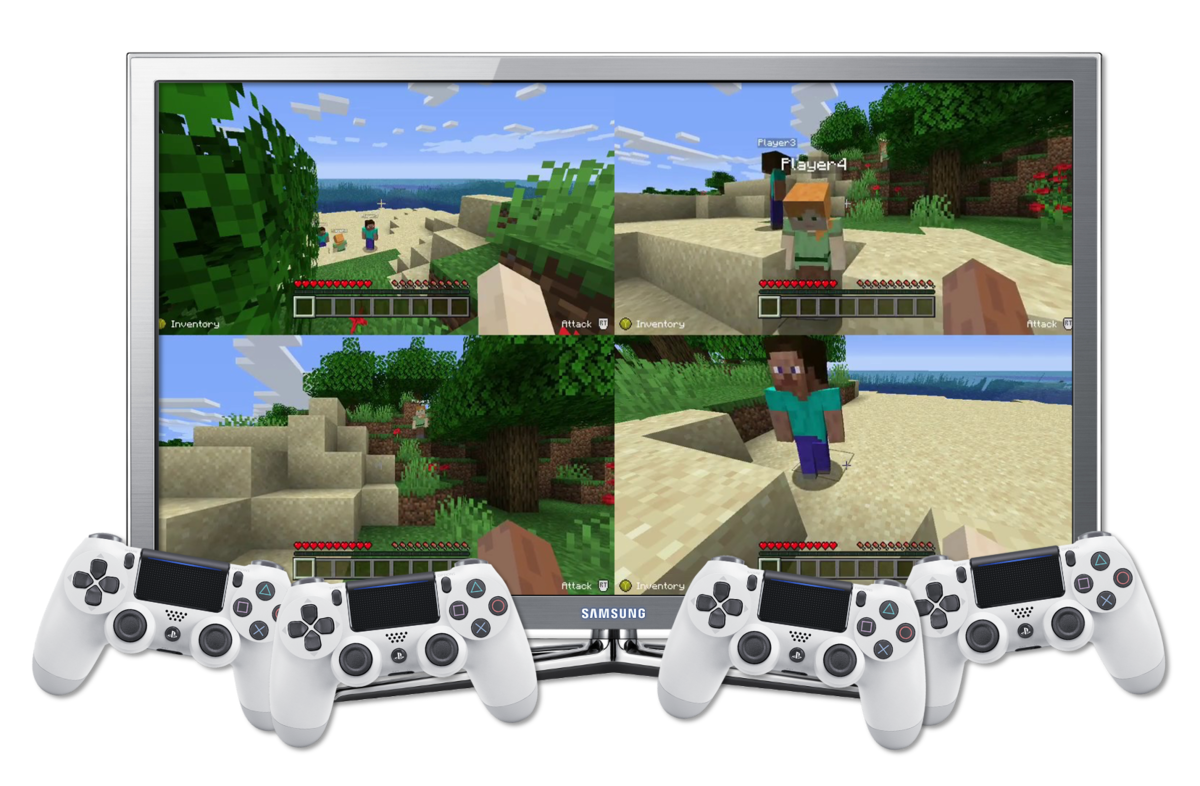 If you are in the same place you can play with up to four players on one system. Each person needs a controller but, of course, you just need one copy of the game. You can do this on the following systems:
Note: On PlayStation 4 and Nintendo Switch, Multiplayer must be turned off in the level settings prior to loading any account that is not PlayStation Plus enabled before they attempt to join in split-screen. 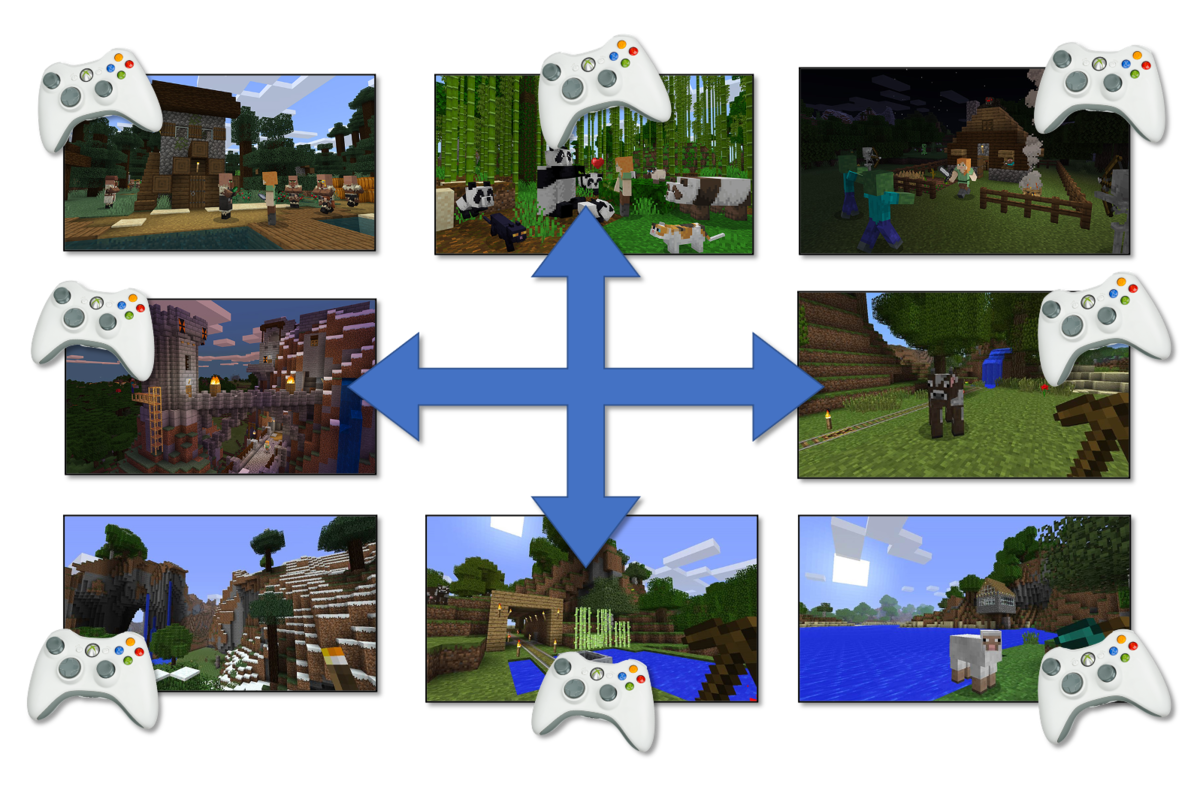 The simplest way to play online with other players is to do so on a single platform. This lets you play with up to 8 players but does require each player to have the exact same system, and own their own copy of the game. They will also need to subscribe to the relevant online service to allow online play. 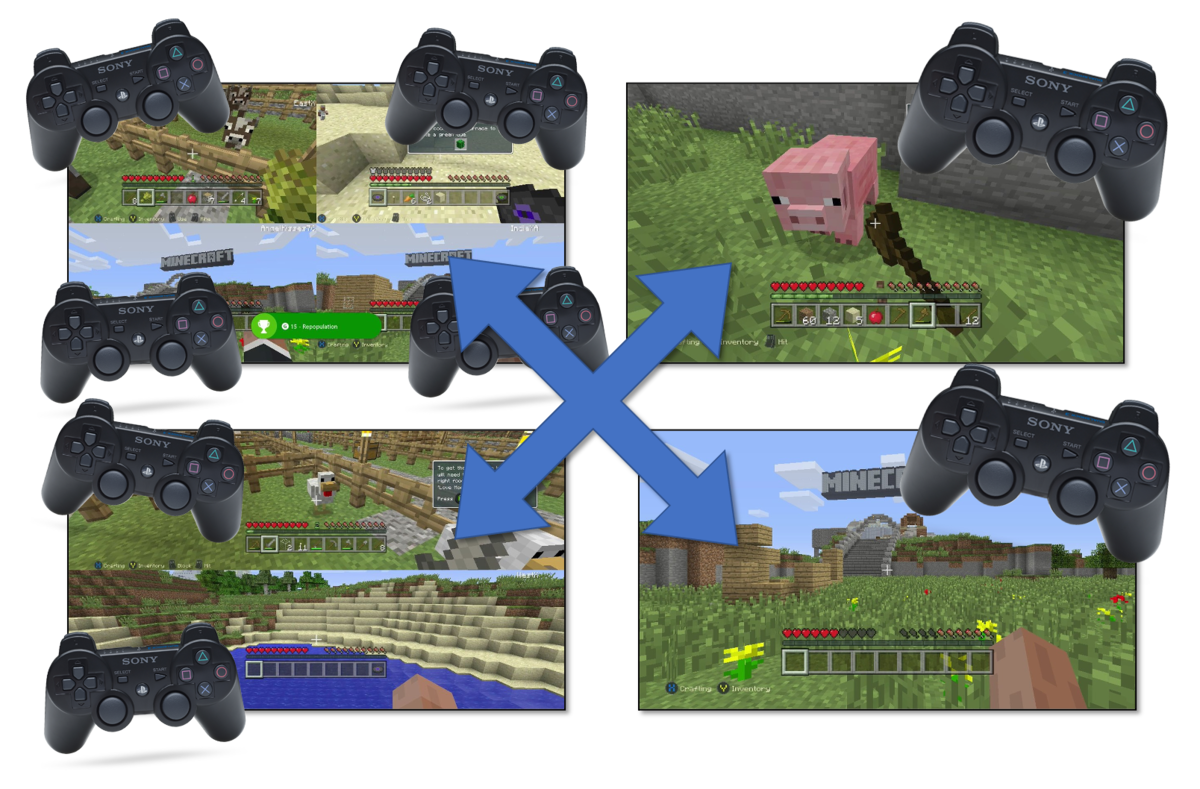 You can get more players playing together by combining taking a split-screen game online. To play cross-platform, each person needs their own copy of the game along with the relevant online subscription service.

One player creates the world on their system by clicking Create New on the Worlds tab then selecting Create rather than Create on Realms. Then, in the game, they can invite played by Pausing and selecting Invite to Game.

Players can only access the Minecraft world if the player who created it is playing the game and has started the world. When that player leaves the game or turns their console off the world is not available. To create a game that is available to other players all the time you need to use Realms, as described below.

The requirement in terms of subscriptions and accounts differs depending on the system you are using. On the older systems you can play with other people on the same system: 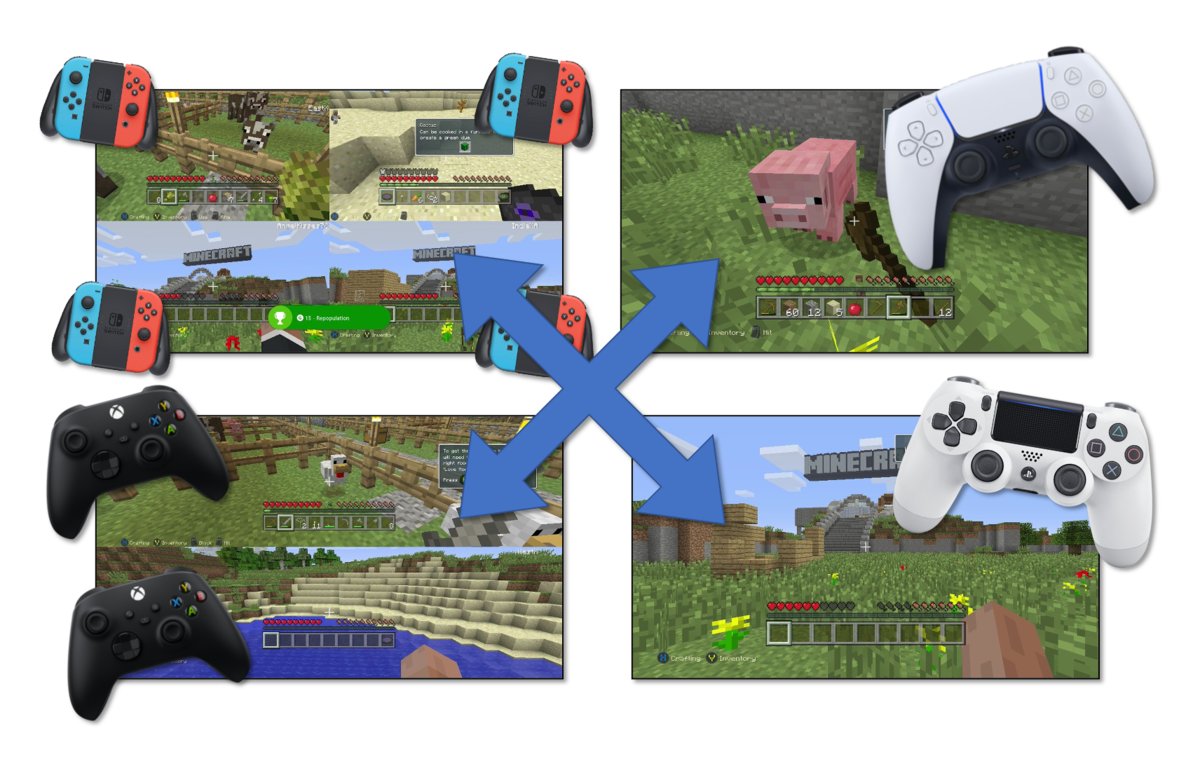 On the newer systems you can play cross-platform with 8 friends on Android devices, iOS phones and tablets, Xbox Series X|S and Xbox One, Nintendo Switch, PlayStation 4, PlayStation 5:

Realms Plus for 10 Players 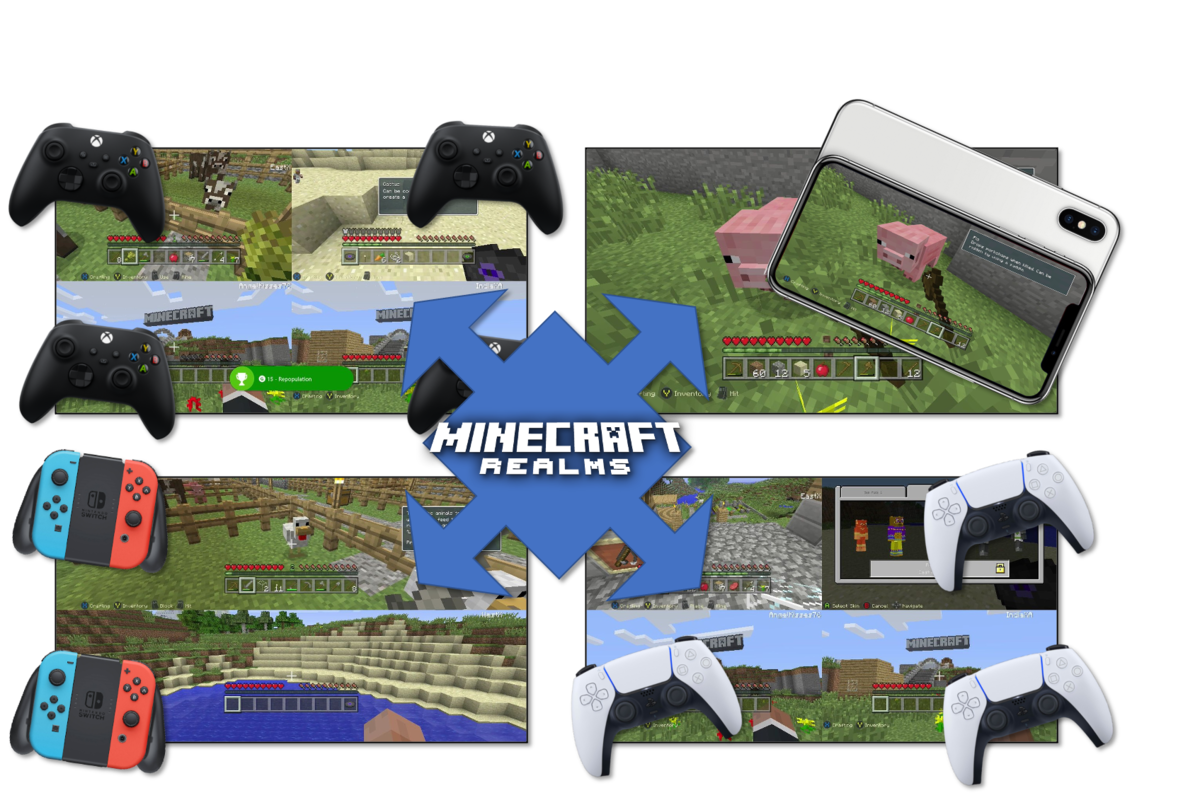 The Realms feature in Minecraft enables a player to create a world that is always available to the other players she has invited, regardless of whether their console is running. The world is hosted on the Realms server.

To start, one player creates the Realms world on their system by clicking Create New on the Worlds tab then selecting Create on Realms. Then, in the game, they can invite played by sharing the Realms link with other players.

Anyone with the link can join the Realm, therefore it’s important to set the level of access new players have by default.
A Realm is automatically backed up when a player joins or leaves. This means that if something goes wrong, or is broken when it shouldn’t have been, you can download the backup and restore the world to that state.

A Realm also grants extra features such as being able to access the Feed section. Here you can press a button to take a screenshot and add it to the Feed (story) of your realm with some comments.

It is also possible to run your own Realm on a Private Server. This gives you access to unique content created by your fellow Minecrafters, whom you can also play with! Servers are full of competitive game modes, builds, and mini-games so creative that only our incredible community could have dreamed them up. Make new friends that love Minecraft as much as you do.

This is most useful in Schools and Colleges. For Families, the cross-platform online play or Realms option is simpler and more cost effective.

Cheapest Way To Play Minecraft Together


Cost of Split Screen
As you can see from the information above, one of the best ways to play Minecraft in the family is in split screen mode. Up to four people playing on one system, each with one controller and their own quarter of the screen. Here's how much it costs to set this up on different systems:

Xbox 360
PlayStation 3
Nintendo Wii U
PlayStation 4
PlayStation 5
Xbox One, Xbox Series X|S
Nintendo Switch
Cost of Cross Platform Online
Another great way to enjoy Minecraft with other people is to play online. To set this up for your family you need the following on each system. Add £5.99 a month to play cross-platform on a persistent Realms world:

iOS/Android
Nintendo Switch
PlayStation 4, PlayStation 5
Xbox One, Xbox Series X|S
Cost of Split Screen Cross Platform Online
You can expand how many players can access the online game using the split screen feature. To set this up for your family you need the following on each system. Add £5.99 a month to play cross-platform on a persistent Realms world: