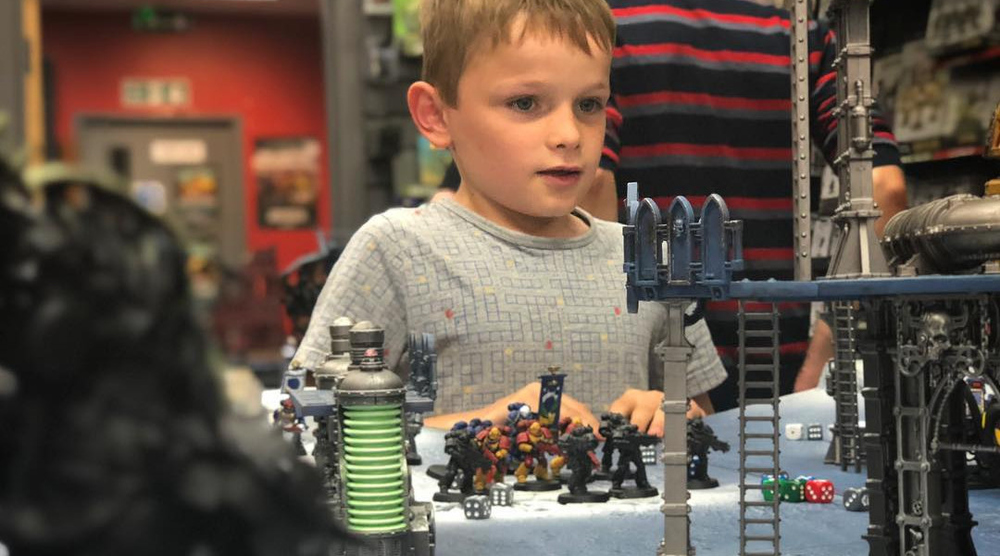 'But there's nothing else to do,' is a common refrain from a child who has been stopped from playing yet another hour of video games. 'I just want to chill out with my friends,' is another emotion children point to when their playtime has been limited.

It's easy to feel like children who play video games are unlikely to find anything else they enjoy. However, a child who loves playing video games is actually set-up for all manner of other hobbies. These range from game-adjacent activities to more wide-ranging pursuits that springboard off a love of a certain game experience.

The challenge, of course, is finding things that are a good fit for your child. Along with the sorts of things you can uncover by Googling – learning a musical instrument or language, drawing and painting, making dens, collecting, getting a pet – the following activities have a particular synergy with people literate with video games, either because they create a similar experience or because they draw on similar skills and abilities. They are ordered with those suited to younger players at the top and those suited to older teenagers at the bottom.

The majority of popular video games have associated fiction and non-fiction books that can be a good route into other activities. There are also books that extend the backstory of a particular game world and its characters or offer players tips for the next time they play. Then there are game-like choose-your-own-adventure books that offer an interactive experience. We worked with the National Literacy Trust to create a list of games where this association with books and reading is strong.

Taking pictures in games is something that's increasingly common. This, along with the way many games (like Tearaway) have a hand-animated appearance, means that children who love games are ripe for getting into photography and animation. You can get Stop Motion animation apps on smartphones and also packs that provide poseable figures to animate. More generally, games like Pokemon Snap or Alba can be a gateway to wildlife photography.

Taking pictures in games is something that's increasingly common. You can pause the game, select a photo mode and then compose a picture. This means that children who love games are ripe for getting into photography. Playing a game to take a particular series of photos (portraits, landscapes etc) can easily lead into taking pictures in real life. Perhaps even travelling (or recreating in Lego) locations from games to then take photos of them. More generally, games like Pokemon Snap or Alba can be a gateway to wildlife photography.

The way many games (like Tearaway or Lumino City) have been made is to appear like they are hand-animated appearance. This means that children who love games are often keen to get into animation. You can get Stop Motion animation apps on smartphones and also packs that provide poseable figures to animate. This does take time and patience but can sooner become something quite ambitious (like this Lego Mario short film we made a while back).

The competitive nature of solving a Rubik’s cube as fast as you can is the initial draw here. But as this hobby develops there is a wide community to engage with, including advice and tips on YouTube and lots of algorithm solutions to learn. Add this to the physical technique of manipulating the cube, and the wide range of cubes that can be purchased, and this is a hobby with a long life – provided you can put up with the infernal click-clacking everywhere you go.

Video games don't, although it seems they do, offer complete worlds. Players often work hard to craft, hone and perfect these virtual machines. They collect things, combine them to create something new, and find innovative ways of making games work the way they need them to. This means that real-world craft and design is a great match for children who love games. Books like Mr Shaha's Marvellous Machines get past children's objection to overly babyish craft projects and inspire them about science through Elastic, Paper, Liquid and Fantasy machines.

Board and Card Games

Beyond the familiar games of Monopoly and Cluedo, there is a whole world of new board games that cross over to the video game audience. Particular favourites in my family include the geographical tactics of Carcassonne, the jewel collecting of Splendor, the card-collecting hilarity of Exploding Kittens and the strategic Greek villa-building of Santorini. You can find these and many others in your local toy store or online.

Using an app on your Smartphone, you go on a treasure hunt to find physical boxes hidden by the geocaching community and enter your name in a logbook. There are hundreds of thousands of boxes hidden all over the world. Kids enjoy the combination of technology and exploration, and there’s a real thrill in finding these hidden in your local area. You can also hide your own boxes and add them to the website for others to find.

Games like Warhammer 40,000 or Warhammer Age of Sigmar involve creating a battle scenario played on a table with miniature figures, counters and scenery. Movement and shooting are calculated with dice rolls, measuring tape and the rule book. The boxes of figures can be quite pricey but offer good value as they not only create a social tabletop game but also encourage players to spend many hours of patiently painting figures. There are also many free clubs in Games Workshop or similar stores where players can compete.

Learning how to create different types of paper aeroplanes from scratch or making your own kites are fun hobbies that can go in interesting directions. There’s a competitive element to the paper-folding that also leads to origami. Interestingly, the Tearaway games on PlayStation reward players with papercraft objects to print and make. The kite-flying can also lead in competitive directions or towards kiteboarding for more exuberant fun.

Comic books create fantastical worlds similar to video games. These range from weekly comics to larger volumes of graphic novels. You may not be able to control the characters but the sense of ownership and involvement is still strong. This comes not only from the slowly evolving story but the strong community of fans and collectors. Local comic stores are the place to start and are usually very helpful and excited to grab your interest. Free comic book day is the 14th of this month at most stores.

Role play is a popular aspect of video games. Pretending to be a character in heroic, dangerous, extreme or just unusual scenarios is what drives many games (and many children to play). This transitions nicely to more traditional Dungeon and Dragon (D&D) role-play games that are played using a book that sets out the rules of the world and dice to determine outcomes. This not only sparks creativity as players use their imagination but also requires considerable reading, teamwork and lateral thinking. Along with playing D&D there are many popular video and podcast series (like Critical Role) where you watch a band of other players work from an epic adventure over 100's of hours.

Along with all sorts of sporting activities, running is particularly easy to get into because you can start from whatever fitness level you have. You might want to find a ‘Couch to 5k’ programme online or join a local weekly run via the parkrun.org.uk website. There are also some great apps that combine gaming with running. These range from Zombies Run!, the interactive Zombie radio-play that incentivises you to run faster, to Run an Empire, where you capture territory by running round it in the real world. Or even just apps like Strava that have a gaming community feel, where you can join monthly challenges to run a certain distance, frequency or ascent in return for achievement badges. If you’re after a slower adventure, the Deep Time Walk app leads you on a 4.6km walk through the Earth’s 4.6 billion-year history.

Cosplay comes from combining the words costume and play. It can sound like something we associate with very young children, but there is a vibrant hobby of older teenagers spending many hours creating not only outfits, but equipment, make-up and accessories to look like their favourite game characters. Cosplay enthusiasts enjoy sharing their outfits online and at video-game or comic book conventions, that offer a safe place for self-expression not unlike the atmosphere by encountering characters at a Disney theme park. It's a great creative hobby, and also a great way for parents to engage with the characters and worlds of video games.

As one mother says, “As a mother, when I go to conventions, it’s just nice to see my kids in a place where they can unapologetically be themselves and be celebrated for it, and not teased or picked on. It’s a place where they get to see other people who love what they love, and it validates that in them. Seeing that is really, really rewarding.”

Many players use social media and message platforms to organise their play. This can be as simple as talking to people who also love the game, or arranging in-game meet-ups for more organised and structured competitive play. These communities need people with communication and technical skills who can co-ordinate and build the community. Older teenagers can really enjoy this game-adjacent activity. It starts as organising their friends but can grow into community management and growth that builds really valuable skills for their future.

Video games inspire many players to create art about the characters and worlds they have played in. It offers a creative outlet that can be shared in online communities or social media and often gets an encouraging response. This could be to write a short story about a game character, draw, paint or sketch something from a game or even craft items from materials you have available in the home. There are sites can collect and display fan art, although the majority require you to be 18 to have an account. Deviant Art is a popular example, that requires some caution for younger teenagers but does let you filter our overly sexual content.

Video games create characters and worlds that can be a great setting for making up stories. Many players write fiction about the games they have played. This can give them a reason to pursue writing that they would otherwise disregard. These stories are called Fan Fiction as they often stray from the official plot or feature minor characters from games. There are a couple of sites that these stories are shared on, although some care is needed due to the often adults sexual content. The Archive Of Our Own site does offer a search filter for younger readers (although not to filter out swearing). For example, this search returns fan fiction for Minecraft flagged as suitable for younger teens.

Developing outdoor survival skills often connects well with children who have enjoyed games with a similar theme. This can be as simple as route planning, building fires or wild camping for the night. Orienteering with a mapping app, using your phone as a compass or reading the night sky with a star chart app can also add some technological interest.