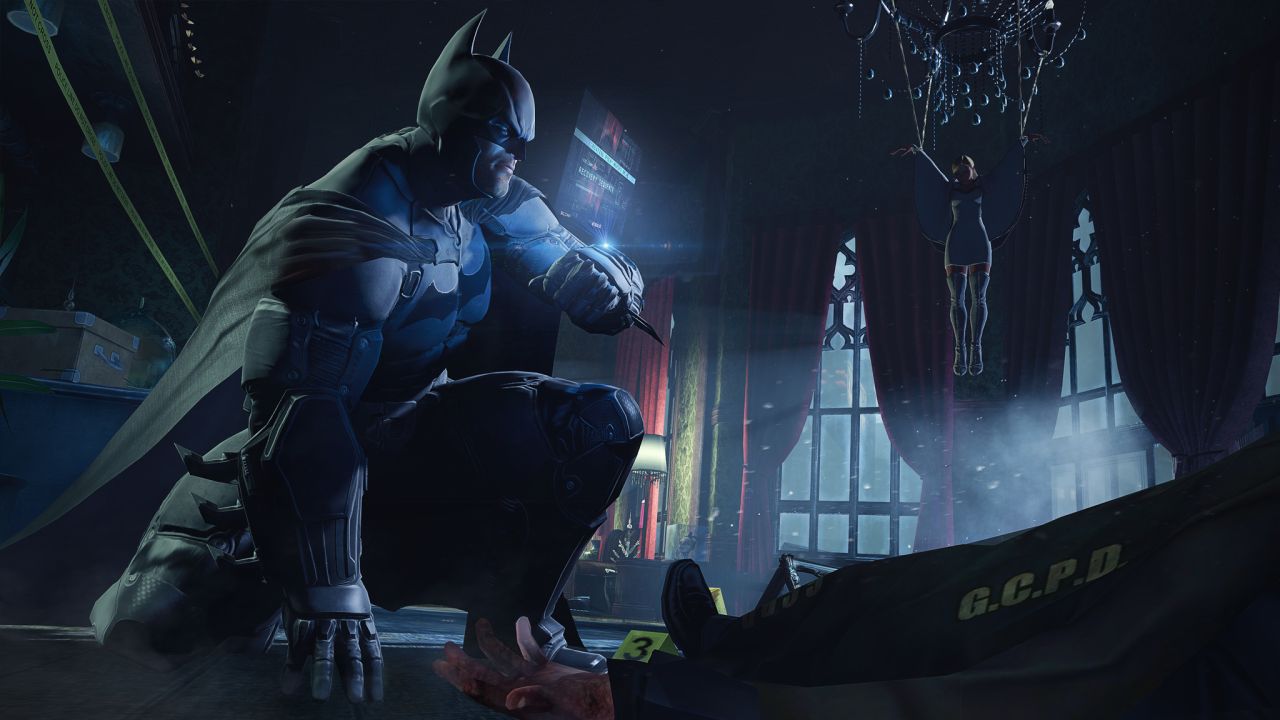 Batman: Arkham Origins is an open-world adventure game. It's the prequel game to the Batman: Arkham series, taking place about five years before the first game, in the early years of Batman's career as a crime-fighter. You explore Gotham, collect items, take on missions and fight bad guys.

It is Christmas Eve and there has been a jailbreak at Blackgate prison and the escaped inmates are causing mayhem in Gotham City. When Batman intervenes he is confronted by Killer Croc, who has been hired as an assassin to take out Batman. After confronting Killer Croc, Batman quickly learns that there are eight assassins after Batman and the $50 million bounty on his head.

You explore Old-Gotham along with the main city from the other games. While exploring you'll work to track down Black Mask, the criminal mastermind who placed the bounty on Batman. This introduces a new Enhanced Detective Mode, where you'll reconstruct crime scenes to solve different crimes and catch Gotham's Most Wanted for unique upgrades.

Like other games in the series, Arkham Origins offers a Challenge mode. However, the game introduces a new "1 versus 100" challenge where you battle 100 increasingly difficult enemies.

View our choice of games like Batman: Arkham Origins. This game is good if you want to:

Duration: This game will take between 12 hours and 20 hours to complete. The game offers a variety of side missions and collectibles which can greatly increase playtime.

Players: This is a single player game. The game used to offer an online multiplayer mode however the mode was discontinued in 2016.


Additional in-game purchases are offered for items that enhance the experience. The game contains two story packs and one challenge pack which add additional content to the game. Other downloadable packs are cosmetic only.

Rated PEGI 16+ for violence. The game contains realistic looking violence throughout with characters responding as you would expect in real life to being kicked punched and attacked with weapons.

Rated ESRB TEEN for blood, drug reference, language, mild suggestive themes, violence. During murder-investigation scenes, short animations depict various stages of the crimes (e.g., a victim's head slammed onto a table; a character getting shot). A handful of scenes depict corpses on the ground, hanging on walls, or arranged in strange poses; some of these scenes depict bloodstains on the floor. During the course of the game, the camera pans on a villain briefly groping the posterior of a female character. The game depicts drug packets in one scene, and several characters discuss illegal narcotics and drug charges. The words “sh*t,” “a*s,” and “*!@?*” appear in the dialogue.

Skill Rating: This game is enjoyed by 13+ year-olds as it's a good match for their ability and maturity. You need to have the skill to navigate a relatively open world as well as take on tough brawls. There is some puzzle-solving, but the main thing here is the resilience to hunt down missions and work through series of objectives.

Batman: Arkham Origins is part of the Batman Arkham series of games: